It is a summer day in 1527. The day began like many others in the ramshackle village of Havana… but soon a startled cry came from the coast. Two strange ships were emerging from the morning mist and bearing down fast upon the settlement.

Panic reigned—and with good reason. Havana’s magnificent harbor had been attracting an increasing number of Spanish trade ships… and with them, the attention of Spain’s enemies. Over the previous few years, an increasing number of ships had been ambushed at sea, and residents of the town knew it was only a matter of time before  some of the bolder aggressors turned their attention on the town itself.

That day had arrived.

As the sun burned off the morning haze, an unnamed French pirate landed his forces on the outskirts of the undefended town. Citizens made a feeble show of resistance, but were quickly cowed into submission. Standing at the center of the town’s main square, the French captain made a stark demand: pay 700 ducats or he would burn the town to the ground. Out of options, the people quickly complied, and then watched in cold fury as the French ships sail away.

Shortly thereafter, three well-armed Spanish ships sailing from Mexico entered the harbor searching for fresh supplies, and the still-fuming habaneros took this as a sign that their luck had changed. Their luck had indeed changed—for the worse.

At once, the townsfolk demanded that the three ships give chase to the French pirates, intercepting them before they got away. Feeling secure in their greater numbers, the Spanish agreed. They off-loaded their valuable cargoes of gold and silver for safekeeping, and prepared to give chase.

The result was a disaster. The overconfident Spaniards were completely outmaneuvered by the French pirates, who after a short series of volleys forced the Spaniards to strike their colors. Once the French learned that the Spaniards’ treasure had been left in Havana, they turned their newly-enlarged fleet around and descended on the town in fury. This time there was no ransom; the pirates engaged in a fortnight’s rampage that left the town completely destroyed.

Ever after, the habaneros obsessed over their town’s defenses.

Havana’s magnificent harbor was both a blessing and a curse. The interior of the bay was large and could easily able to accommodate entire squadrons of the large, ocean-going ships sailing the Atlantic. Even better, it had a narrow entrance, giving it protection not just from the elements, but from hostile forces, too. Best of all, it was perfectly positioned along the major shipping lanes; ships sailing back to Europe needed to pass along through the Straits of Florida and hug Florida’s Atlantic coast to catch the Prevailing Westerlies that would bring them to Europe. With its ample, well-supplied harbor, Havana became a major transit point for ships heading home for Spain laden with the treasures of the New World.

And the amount of treasure these ships held is hard to fathom. Gold, silver, emeralds spices, and dyes from all across its vast empire were being shipped back to Spain in increasing quantities—the estimated value of Spain’s New World trade was $400 million per year in 1550, rising to nearly $1 billion per year by 1575. And nearly all of it was going through a dusty boom-town named Havana.

Unfortunately, the town that sprang up to service these treasure ships had grown haphazardly and lacked any kind of defense. Raiders took notice, and repeatedly menaced the town. In response, the authorities authorized the hasty construction of a fortress to guard the harbor.

Sadly, this new fortress failed the first time it was tested.

In July 1555, the infamous French raider Jacques de Sores attacked, leading a small fleet of four ships that quickly overwhelmed the tiny fort. De Sores had already looted Santiago de Cuba further south, and was lured to Havana by the dream of even greater riches. When the reality didn’t match his lofty expectations, he made a rough occupation of the town. The locals tried to organize a counter-attack; it failed, leading to a violent reprisal. After a month, de Sores was convinced there was nothing more to loot, and began an indiscriminate destruction of the town, killing a third of its vecinos (licensed residents) and burning it to the ground.

And the attacks kept coming. Pirates sailed in looking for gold, military leaders sought to threaten Spain’s strategic position… there was even a raid from a figure named “The Avenger” who claimed to be avenging the destruction of the Indians. In one memorable incident, pirates chased a ship into the harbor, and the quick-thinking captain ordered his entire cargo thrown overboard into the shallows, to be retrieved later.

By the 1560s, the Spanish crown had enough. Realizing the seriousness of the threat posed by French and English pirates, Phillip II took a series of steps to protect Spain’s ships and its most important seaport. First, he established the flota or “treasure fleet” system, meaning that all ships would travel together in a single fleet for safety, under the escort of heavily armed galleons. Each year between May and August, all west-bound ships gathered in Havana; when the fleet was fully assembled, it traveled together to Seville.

To protect Havana’s harbor, the crown ordered the construction of a new, imposing fortress where the inner harbor begins to open up—the Castillo de la Real Fuerza (Castle of Royal Forces). This fort, finished in 1577, is the oldest building still standing in Havana. Immediately after it was completed, it was criticized—its moat was too deep, it’s central courtyard was too small. Worse, it was considered to be located too far into the harbor to deter invaders. But it was enough. The dreaded English privateer Sir Francis Drake, approached the harbor, fired a few shots at the fort, and then sailed away. For the first time in nearly a half-century, habaneros breathed a sigh of relief. 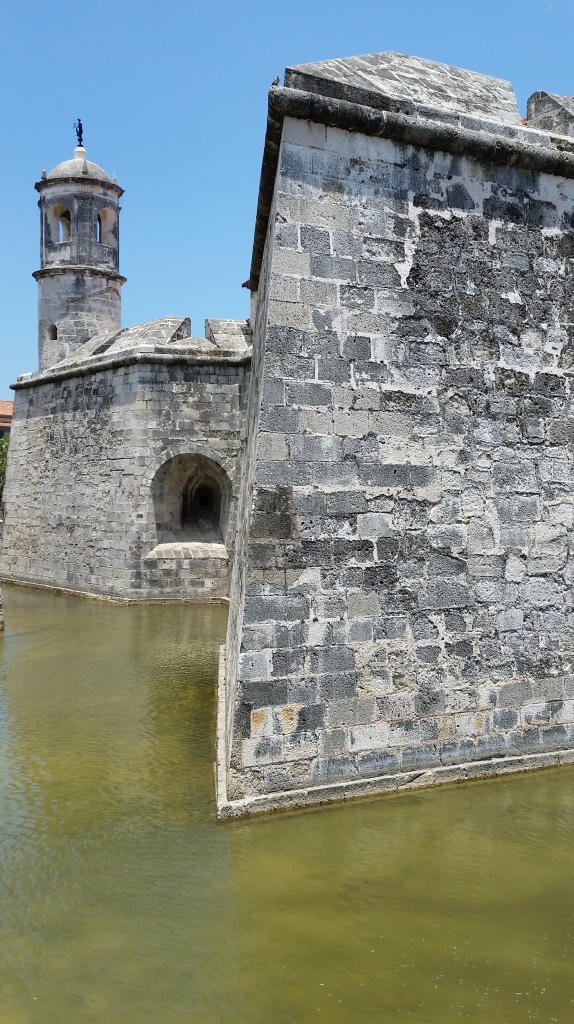 But they were not taking any chances. Immediately after the Castillo de la Real Fuerza was finished, the crown began two larger, more imposing forts to guard the harbor’s entrance: The Castillo de San Salvador de la Punta on the western bank, and El Castillo de los Tres Reyes del Morro on the eastern bank. “El Morro,” as the later is widely known, is one of the largest fortresses Spain ever built—a massive, threatening edifice perched on a sharp cliff rising right out of the sea. It is hugely impressive, and has long been one of Havana’s most famous landmarks. Along with the principal forts, a series of batteries were built to guard the approach to the city (the modern day Hotel Nacional stands on the site of one of these outposts).

It took nearly 40 years to fully construct these defenses; but once they were completed, Havana stood as the most heavily fortified city in the Spanish Empire. Pirates continued to harass shipping in the strategic Straits of Florida (Dutch pirate Piet Heyn famously captured the entire treasure fleet off the Cuban coast in 1628), but the city itself remained safe until the British invaded in 1762.

So important were the three great fortresses to the city’s identity that they were incorporated into the city’s official coat of arms, which consists of three towers and a golden key—signifying Havana’s status as “the key to the Indies.”

Royal Coat of Arms for the City of Havana, showing the three fortresses and the golden “key of the Indies.”

To a large degree, Havana owed its early success to the rise of piracy in the sixteenth century. Faced with a host of external enemies, Spain retrenched and concentrated its efforts into making Havana an impregnable fortress. Once secure, the Havana became the Caribbean’s leading center for ship building and commerce, eclipsing rival cities and becoming one of the largest, most important cities in the Americas.

[For more on my personal experience visiting one of the great pirate forts while in Havana with the Minnesota Orchestra, click here.]

3 thoughts on “Havana and the Real Pirates of the Caribbean”