One concert down… one to go.

In case you are just making your way to my blog, I’m currently in Havana covering the Minnesota Orchestra’s historic tour to Cuba. And as a man who makes a living from writing, I’m embarrassed to admit I’m having a hard time describing everything that’s going on… it feels like mere words are simply not enough. 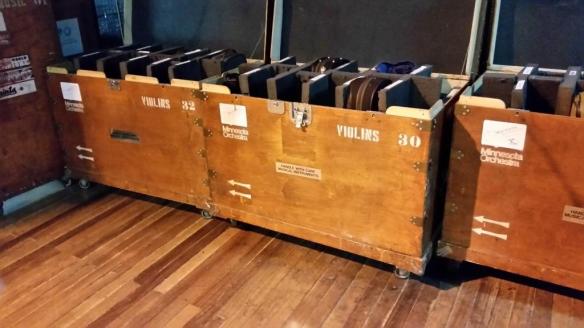 My review of last night’s concert will run Monday in MinnPost, but in the lull between last night’s hugely successful concert and the one later tonight, I wanted to provide a glimpse into what’s going on backstage.

Purely from a logistical point of view, this concert is a massive, even Pharonic undertaking. We brought in approximately four tons of equipment to make everything possible… including a collapsible acoustical shell for the stage of Havana’s Teatro Nacional. And it wasn’t simply a question of setting it up once and being done—we’re here for Cuba’s famed CubaDisco musical festival, and the same stage is being used by other groups for other events, too. At his first inspection of how the stagehands had set up the space, Osmo was afraid that the Orchestra had been set too far back; stage manager Dave McKoskey assured him that the Orchestra would be pulled forward for the rehearsal and performances. Everything would be good to go.

I’m tempted to add “as if by magic,” yet that is totally not the case. The Orchestra’s stage crew—Gail, Joel, Dave, Don, and Terry—worked their collective tails off to make it happen. It wasn’t magic, but rather expertise and grit.

They were helped by a solid crew of Cuban stagehands. When Osmo first arrived, the theater’s stage manager came over specifically to tell him what a profound honor it was to have us there. He added that classical music was his passion, and he was coming with his family to both performances.  He assured us that we were in good hands.

And so we were. In my time here, I’ve seen that Cubans are an astonishingly resourceful people; they are experts of taking whatever is at hand and making it work. A famous example of this is the continued use of classic 1950s-era cars, which are lovingly held together with hand-made parts. Another example of this resourcefulness comes from these concerts. Minnesota Public Radio brought a vast array of broadcast equipment, but they needed a control station inside the hall. “No problem,” our Cuban hosts declared… and they build a table to hold the equipment out of wood they could find. Sadly, the minute the equipment was placed on it, the jury-rigged table sagged alarmingly. “No problem,” our hosts declared again. This time, they worked with MPR’s personnel to create a support structure from the equipment cases. That has appeared to do the trick. 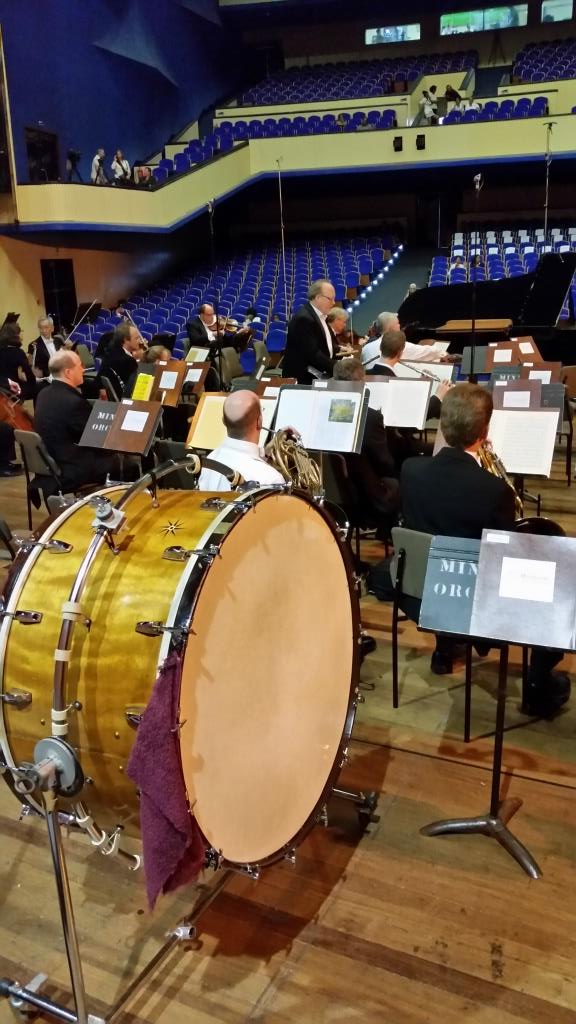 The pre-concert, backstage experience was somewhat surreal. Essentially the stagehands augmented the small changing rooms by creating a series of mobile locker rooms for the musicians to use backstage. The musicians made the most of these areas, zipping through—or sometimes barreling through—as they finished getting ready. In addition to getting into concert dress and tuning, many were testing their instruments, seeing how they responded the heat and humidity. It was a wonderful blur of sound.

While the musicians were doing that, the stagehands (of every nationality) were running wildly in every direction. For example, programs had to go to the front of the house… so guys loaded up boxes and sprinted down a short stairway leading down from the stage (as we watched this all transpire, Star Tribune reporter Graydon Royce and I looked at each other and said nearly in unison, “There’s no part of this operation that is OSHA-approved.”)

Thrown into the mix were about five trillion press folks swirling around, hurriedly conducting interviews with anyone who would hold still for a minute. Plus, there was an entire legion of photographers—enough cameras were clicking that one would be excused from assuming that someone was practicing on a snare drum. Amidst the rattle of snapping shutters, one musician murmured, “I’ve never been so self-conscious about how I look in my life…!”

But finally, the concert start time overtook us. Preparations wrapped up, and although it may have felt like there were a thousand things left to do, I think everyone realized just how much had been achieved, in such a short amount of time. It was remarkable, and we all helped make it happen, each in our own way.

And so, with a mixture of pride, wonder, anticipation and adrenaline, we got under way… and presented a concert for the ages.

1 thought on “A Look Backstage from Cuba”