My apologies—this post has been a long time in coming.  Too long, really, but a confluence of life events made it nearly impossible for me to sit down at the computer and put my thoughts into words.  Especially when my thoughts were so troubled.

The shooting in Orlando was… monstrous. It was appalling. It was infuriating.  And these are my feelings while safely ensconced in Minneapolis; I cannot imagine how much worse the pain feels for those directly involved.

So let me say this: to Orlando, and to the LGBTQ community as a whole, I stand with you. I am so sorry for this pain.

Do not doubt that there are many others across the country and around the world that stand with you in the face of this devastating attack.  I’ve been gratified to see rainbows crop up all over the world in solidarity with you, from the Eiffel Tower and City Hall in Tel Aviv, to the Sydney Harbor Bridge and One World Trade Center in New York.  Mark Cuban donated $1 million to the Dallas police force to provide additional security for the LGBTQ community there.  Utah’s Lt. Governor made a statement to the LGBTQ community, asking forgiveness for his past homophobic attitude and actions.  And there have been many more gestures of hope, shared sadness, and support.  I hope in some way these gestures can bring at least a degree of healing, both from the tragedy itself and some of the additional ugliness that bubbled up in its wake. 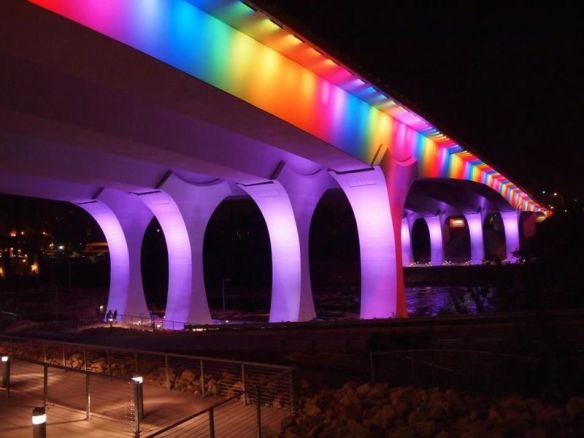 Minneapolis’s 35-W bridge that spans the Mississippi was lit with rainbow colors after the Orlando shooting.

I also realize that although this shooting has affected the LGBTQ community most deeply and personally, it has also had a much larger impact—one that we’re just starting to come to terms with.  As President Obama correctly pointed out, this wasn’t just a hate crime, but an act of terrorism as well.  In the past few days we’ve seen that this specific incident has touched on many of this country’s most contentious social questions: gun control, national security, LGBTQ rights, immigration, and Muslims in America. The resulting conversations have been difficult, but that is to be expected—our most challenging conversations always occur when our highest aspirations collide with our deepest fears.

But as important as those conversations are, I want to set them aside for the moment.  Today, I want to simply share my solidarity with those affected by the tragedy, and commit to doing what I can to ensure that such atrocities do not happen again.  To create a world with less violence and less prejudice.

I’m proud to stand with Orlando.